Blues From the Desert, Recorded On-Site 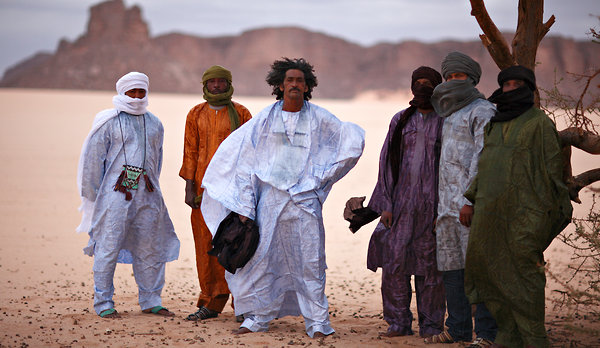 The African band Tinariwen named its new album “Tassili,” after the desert region near Algeria’s border with Libya where it was recorded. More Photos »

In the language of the Tuareg nomads who for centuries have roamed the most remote reaches of the southern Sahara, “tinariwen” means “deserts.” But ever since the musical group of that name released its first CD in 2001, its members have recorded not on their home turf but in much the same way that American and European bands do: in the artificial environment of a recording studio, in cities like Paris and Bamako, Mali.

With “Tassili,” released on Tuesday, Tinariwen, whose music is a hard-rocking hybrid of Berber, Arab, Western and black African styles, has sought to return to its beginnings. Named for a spectacular area of canyons and sandstone arches near Algeria’s border with Libya, the CD was rehearsed and recorded out of doors there, in tents and around campfires much like those where the group’s founding members, political exiles then living in refugee settlements, first came together to play.

“We wanted to go back to our origins, to the experience of ishumar,” which means exile or being adrift, explained Eyadou ag Leche, the band’s bass player, speaking in French during an interview in New York in July. “Those were times when we would sit around a campfire, singing songs and passing around a guitar. Tinariwen was born in that movement, in that atmosphere, so what you hear on ‘Tassili’ is the feeling of ishumar.”

Tinariwen was founded around 1979 by the singer and guitarist Ibrahim ag Alhabib, who was born in Mali but fled that country as a child after his father was abducted and killed by government forces trying to put down a Tuareg rebellion. Now 51, Mr. Alhabib spent time in Algeria, Niger and Libya, where he joined a Tuareg army backed by Col. Muammar el-Qaddafi; there his ability to write songs about the plight of the Tuareg, shuttling from one country to another but belonging to none, made him a leading voice of resistance and autonomy.

By 1985 “Tinariwen’s songs were already circulating across the Sahara on the cassette grapevine, copied over and over again,” said Andy Morgan, the group’s former manager, who is writing a book about the band. For the next four years, he added, “Ibrahim and several others who had already received infantry training were in a camp near Tripoli, where their job was to play music” sympathetic to the Popular Movement for the Liberation of Azawad, which aimed to establish an independent Tuareg republic in the Sahara.

Over the last decade, though, Tinariwen has won a following among American and European pop musicians and audiences that crave authenticity and passion in both music and attitude. The guitar is not a traditional instrument for the Tuaregs: Mr. ag Alhabib recalls fashioning one as a child after he saw it being played in a movie, but when he and other members of Tinariwen were able to return to Mali in the 1990s, the band began building or acquiring all the instrumental accoutrements of a modern rock band.

“Theirs is music that at the same time seems very familiar, starting with the guitars and the call and response element in the vocals, but also sounds exotic to the ear,” said the guitarist Nels Cline of Wilco, who supplies an eerily swirling guitar background on “Imidiwan Ma Tennam,” the new CD’s opening track. “You’re listening to stuff that really rocks, but is also very stripped down. There is an air of mystery and longing, and that creates a mood that is palpable, very compelling and attractive for all kinds of people. It’s wonderful music, and not just for guitarists.”

Tinariwen’s music has sometimes been called “desert blues,” and the group’s penchant for writing songs in minor key modes certainly creates a sound that has a blue feeling. But the band’s members prefer to talk about “asuf,” a sentiment from their own culture and Tamashek language that describes both a sense of spiritual pain, yearning or nostalgia and the emptiness of the desert itself. That, they acknowledge, creates a certain kinship with the bluesmen of Mississippi and Chicago.

“We didn’t know about these people at first because we were in our own universe,” Mr. ag Leche explained. “But when we first started hearing Hendrix, just to name someone, we felt something immediately. It was almost as if I had known that music from the day I was born. I’m told that a lot of the Africans who went to North America came from West Africa, from our part of the world. So it’s all the same connection. I think that any people who have lived through something that is very hard, feel this asuf, this pain, this longing. That is what will make their music sound similar to each other.”

For the more organic and acoustic sound Tinariwen wanted on “Tassili,” the group turned to Ian Brennan, an American producer who has worked with other African groups as well as with American artists like Ramblin’ Jack Elliott and Peter Case. Hundreds of pounds of equipment had to be hauled to a canyon deep in the desert and run off a generator placed about 150 yards from the main tent to eliminate hum from the recording and “to keep any critters from coming closer,” Mr. Brennan said.

“This music needs space, it needs to be wild and free,” he added. “My interest is in capturing and conveying emotion, so I believe that raw and real is almost always better. They feel the same way, and so this was the least overdubbed, most live, band-centric and song-oriented record they have done.”

For the other Americans who were invited to play on “Tassili,” making the record in the heart of the desert was both an adventure and a challenge. As the producer, Mr. Brennan was there for the entire three-week session last November, and for eight days he was joined by two members of the Brooklyn indie rock band TV on the Radio, the guitarist Kyp Malone and the singer Tunde Adebimpe, who had first met Tinariwen a couple of years ago when the two bands were on the same bill at the Coachella festival in California.

“There were cultural differences to consider, but it was one of the most rewarding musical experiences I’ve ever had,” Mr. Malone said. “Making the record seemed almost secondary to the overall experience of people coming to hang out and pay tribute, bringing animals to eat and sitting around the fire with friends of the band who could play rings around me, singing Algerian and Tuareg songs. It felt like a privilege to be there.”

But with a tour scheduled this fall to support “Tassili,” soon it will once again be time for Tinariwen — which operates as a collective, with anywhere from five to nine members, depending on factors like who has herds to tend or whose wife is pregnant — to move out of its cultural space and into ours. And with that, the feeling of asuf will return, feeding a yearning for the desert even as it powers the music.

“You think differently when there are walls around you,” Mr. ag Leche mused. “In a studio or a city you have to eat at a certain time and follow a schedule. In the desert the freedom is total. You do what you want when you like. When we are onstage, you can see us, we are there. But our heads are in a different place. We are at home.”

A version of this article appeared in print on September 1, 2011, on page C1 of the New York edition with the headline: Blues From the Desert, Recorded On-Site.

This website uses cookies to improve your experience while you navigate through the website. Out of these, the cookies that are categorized as necessary are stored on your browser as they are essential for the working of basic functionalities of the website. We also use third-party cookies that help us analyze and understand how you use this website. These cookies will be stored in your browser only with your consent. You also have the option to opt-out of these cookies. But opting out of some of these cookies may affect your browsing experience.
Necessary Sempre abilitato
Necessary cookies are absolutely essential for the website to function properly. This category only includes cookies that ensures basic functionalities and security features of the website. These cookies do not store any personal information.
Non-necessary
Any cookies that may not be particularly necessary for the website to function and is used specifically to collect user personal data via analytics, ads, other embedded contents are termed as non-necessary cookies. It is mandatory to procure user consent prior to running these cookies on your website.
ACCETTA E SALVA