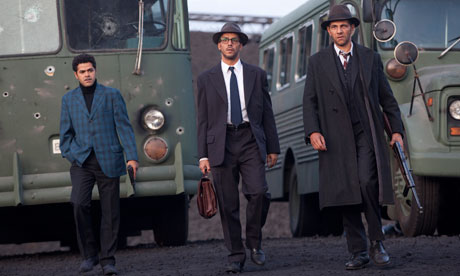 The still highly controversial colonial war that France fought in Algeria from the mid-1950s until the granting of independence in 1962 has only been patchily reflected in the cinema. It figures significantly in the background in films as different as Alain Resnais’ Muriel and Michael Haneke’s Hidden, and in 1966 there was Lost Command, a Hollywood version of Jean Lartéguy’s French bestseller The Centurions about a battalion of Indo-China veterans reassembling for another bitter colonial conflict in Algeria. The only truly memorable movie is the Marxist The Battle of Algiers (1966), set in the early days of the revolution, directed by Gillo Pontecorvo and initiated by Yacef Saadi, a leader of the FLN (National Liberation Front). Banned in France for several years and regarded as one of the greatest political movies ever made, The Battle of Algiers was shown by the Pentagon to all senior officers and civil advisers going to Iraq and Afghanistan to show “how to win a battle against terrorism and lose the war of ideas”.