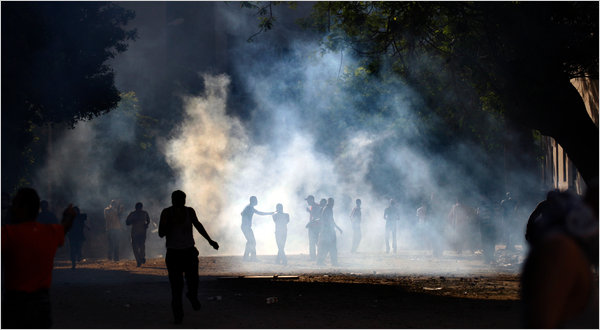 Demonstrators walked through a cloud of tear gas during clashes with the Egyptian security near the interior ministry on Wednesday in Cairo.

CAIRO — Clashes between Cairo residents and security forces eased Wednesday afternoon after deepening into pitched street battles, the first since the revolution that toppled Egypt’s government five months ago.

The clashes began Tuesday evening when the police refused to allow a crowd of people to enter a central theater for an event commemorating protesters killed during the 18-day revolution in January. Many in the crowd said they were relatives of those who died and fought with the police to gain entry. The police responded by attacking the crowd, until they reached the square. There, thousands of people, outraged at hearing of the harsh police action, joined in the clashes, which lasted into the night.