At Home With Susan Sontag

Using History to Sell Clothes? Don’t Try It With the Pharaohs

Zahi Hawass, Egypt’s longtime chief antiquities official, has been criticized in recent months for many things: his closeness to former President Hosni Mubarak, some inconsistent reports on the safety of archaeological sites during the uprising and for his role in a dispute over an Egyptian museum bookstore, for which he now possibly faces jail time.

The latest on the arts, coverage of live events, critical reviews, multimedia extravaganzas and much more. Join the discussion. 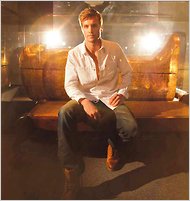 From an overnight fashion shoot in New York last fall, a model, in front of a sarcophagus, wearing an ensemble from the Zahi Hawass collection.

But the source of the latest controversy to beset Mr. Hawass resembles something straight from the mouth of J. Peterman, the character on “Seinfeld” based on the clothing catalog retailer of the same name.

Mr. Hawass has lent his name to a men’s wear brand: a line of rugged khakis, denim shirts and carefully worn leather jackets that are meant, according to the catalog copy, to hark “back to Egypt’s golden age of discovery in the early 20th century.”

“Zahi Hawass is a novel fashion line, not just for the traveling man, but the man who values self-discovery, historicism and adventure,” says the Web site for the company that designed the line. Some detractors have said that the Hawass clothing, which was first sold at Harrods in London this month, commercializes Egyptian history, and some object to the catalog because they thought — incorrectly, according to the makers of the clothing — that models had sat on or scuffed priceless ancient artifacts during the photo shoot.