PARIS — Ratko Mladic, the former Bosnian Serb general accused of masterminding the massacre at Srebrenica in 1995, has been captured in Serbia after more than 15 years as one of the world’s most wanted fugitives. 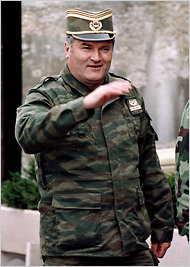 Serbian news reports said that Mr. Mladic was living under the name of Milorad Komadic and that he was captured in Vojvodina, the Serbian province north of Belgrade, after authorities received a tip that the man known as Komadic resembled Mr. Mladic and had identification documents with that name.

Mr. Mladic is blamed for the worst ethnically motivated mass murder on the Continent since World War II, the massacre of about 8,000 Muslim men and boys from the Bosnian town of Srebrenica.

By DOREEN CARVAJAL and MARLISE SIMONS