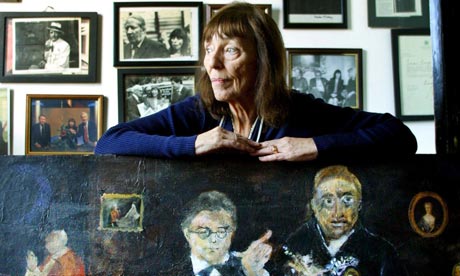 Beryl Bainbridge at her home with one of her paintings. Photograph: Adrian Dennis/Rex Features

Beryl Bainbridge‘s daughter, Jojo Davies, is lifting one painting after another outside into her back garden so they can be photographed in a clear light. The paintings are by her mother. Beryl Bainbridge died of cancer on 2 July last year, but her career as a novelist seems to have a life of its own. She has recently been honoured by Booker (she was shortlisted five times for the prize) with a special award for Master Georgie (1998) and her new novel, The Girl in the Polka dot Dress, is out in June (she did not complete it, but editor Brendan King has adroitly remastered it).

All this would be remarkable enough, but the most extraordinary thing to emerge since her death is Bainbridge’s other life: as a painter. It is already being said that if Bainbridge had not succeeded as a novelist, she would have made her name in paint. The canvases are resurfacing and an exhibition is in prospect.