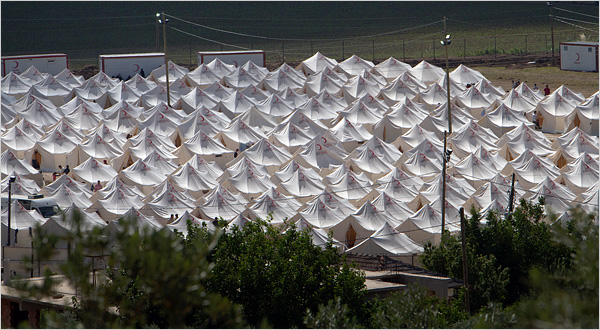 Syrian refugees on Monday in the tent compound in Boynuyogun, Turkey, near the Syrian border.

CAIRO — Syria’s most trusted forces retook control of a rebellious northern Syrian town on Sunday, responding with tanks and helicopter gunships and crushing an alliance of mutinous soldiers and armed civilians, while prompting thousands of frightened residents to flee into Turkey or camp out in open fields on the border.

Syrian children rested on suitcases in a refugee camp near the Turkish border on Sunday after fleeing a government attack.

For days, the Syrian forces had been closing in on the town, Jisr al-Shoughour, bombarding the countryside and burning fields until Sunday morning, when they cleared explosive traps laid at the entrance to the town, according to witnesses and the government’s own official dispatches.

By the end of the day, Jisr al-Shoughour was largely abandoned, heavily damaged by the bombardment and gunfire, the witnesses said.