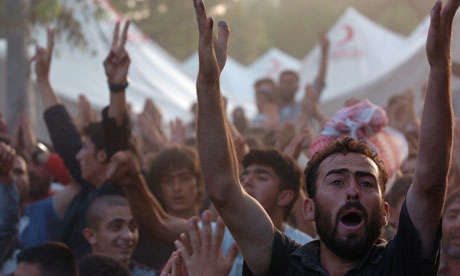 Hikmat was one of the few remaining residents in Jisr al-Shughour when the Syrian army rolled in, firing wildly and at will. “They didn’t care what they were shooting at,” said the 39-year-old, who was hit in the foot as soldiers finally delivered on a week-long threat to wreak havoc in the town that dared rage against the regime.

Jisr al-Shughour has now been sealed off by some 15,000 troops – backed by tanks and helicopters – who are operating with impunity.

Hours after being wounded, Hikmat fled for the Turkish border. “There was a good man with a motorcycle who gave me a ride,” he said. “We had to travel at night because the roads were still not safe.” He said he passed “many, many” people from the town of more than 40,000 who had fled to the rolling hills between Jisr al-Shughour and the safety of the Turkish border. “They are too scared to move. They are terrified.”

Those who have crossed the frontier are shedding increasing light on three days of bloodshed that have changed the face of the Syrian revolt. Until now there have been few voices able to speak out about what was left behind in Jisr al-Shughour or the events leading up to last weekend’s carnage.

The Syrian information ministry said that the bloodbath had been caused by armed gangs, which attacked the military and killed 120. Interviews conducted in recent days, however, have painted a very different picture. They tell of a crackdown far more brutal than any other seen since the first uprising three months ago, although protests have been met with ever-increasing force by President Bashar al-Assad.