BRUSSELS — Since the euro zone crisis got under way in earnest a year ago, various Cassandras have warned that the day would come when voters would rise up in revolt against paying for the mistakes of others with costly bailouts. 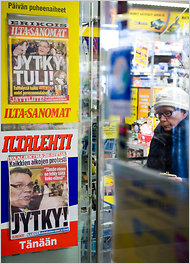 That day came on Sunday, when Finnish voters awarded 19 percent of their ballots to the nationalist and populist True Finn Party, which is highly skeptical of bailouts for countries like Greece, Ireland and, most pertinently, Portugal. The results made the True Finns the odds-on favorites to become coalition partners in a future government.

“Sunday’s results are a clear warning shot to those who had thought that European politics would not be overly affected by the crisis in the periphery,” Frank Engels and François Cabou, analysts for Barclays Capital, wrote Monday in a research note. A bailout for as much as $115 billion for Portugal was thrown into doubt by the vote, since the rescue requires unanimous approval by the euro zone’s 17 members.

By JAMES KANTER and MATTHEW SALTMARSH