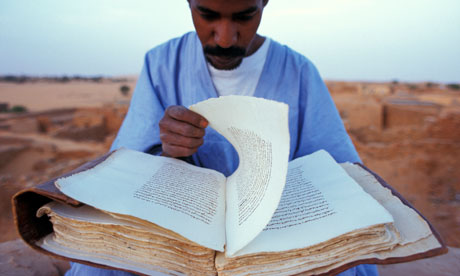 The bone-dry wood creaks as the book opens at a page representing the course of the moon, framed by black balls and red crescents. The manuscript contains 132 pages of Arab astronomy bound in well-worn leather, a 15th-century treasure stored, with similar items, in a cardboard box in a traditional dwelling in Chinguetti. This historic town, on the Adrar plateau in Mauritania, holds some of the finest collections of old Arabo-Berber books, but now the desert libraries are disappearing.

With a sudden decline in tourism, Mauritania is spending all available resources on security and combating al-Qaida in the Islamic Maghreb. The government has no time for heritage. “It’s not been a priority in recent years,” the arts minister, Cissé Mint Cheikh Ould Boide, acknowledges. Handed down from generation to generation the manuscripts, some of which date from the 10th century, still belong to families and are dispersed around four main centres, Chinguetti, Ouadane, Oulatane and Tichitt. The towns have been on the Unesco World Heritage list since 1996. On the route of pilgrims travelling to Mecca and of caravans loaded with dates and salt serving a vast area from northern Mauritania to Sudan, the towns used to be a major tourist attraction. But visitors are scarce and the books are being forgotten.