Manet: the Inventor of Modernity – review 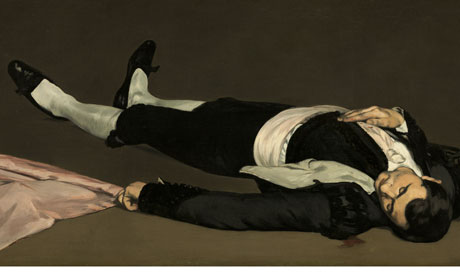 Manet, at the Musée d’Orsay, starts with a shock: a dead toreador laid flat upon the ground, crimson paint seeping from one shoulder like blood. His body fills the frame, clad in black silk and white satin. From his gleaming shoes to his spreading pallor, the painter has summoned his presence so superbly, and so closely, it seems as if you could stroke that soft hair.

So close, and yet so far beyond reach. The portrait is overturned. To see the face you would have to be nearly upside down, a vertigo abetted by the extreme foreshortening of the corpse. This is not how the toreador must have looked, fatally gored by a bull. The body has been moved; the diagonal declares the artifice.

Manet has positioned his hero to invoke the suddenness of fate, the upright body instantly felled (and by implication the opposite, so that you may imagine him rising again). It is a tremendous performance, this pictorial laying to rest. You want to applaud.

This was emphatically not the contemporary response. In his short life (1832-83) Edouard Manet met with continual rejection and scorn. His silent trio on their famous green balcony; his naked Olympia staring laconically from her chaise longue; his barmaid among the glittering lights of the Folies Bergère, doubled, and estranged, in the mirror behind her: all were mocked by the press and refused by the Salon.