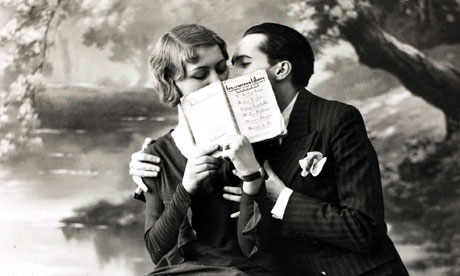 ‘Love-language has been pulled differently in different eras between the great
generalising symbols – the heart, the rose, the fixed star.’ Photograph: Bob Thomas/Popperfoto/Getty Images

At matins on 6 April 1327, in the church of St Clare in Avignon, Francesco Petrarch may or may not have seen Laura for the first time: her skin “whiter and colder than snow, not touched by the sun for many years”, golden hair, black eyes. We don’t know for sure whether Laura really existed. Some of Petrarch’s contemporaries thought she was just a symbol and a pretext, though on the flyleaf of his Virgil he noted not only the date of his original glimpse of her but also that 20 years later he had news of her death in the plague – and a passing remark implies she was married and might have been worn out over the years with childbearing. From that moment of encounter in Avignon anyway – whether mythic or actual – flowed the inspiration for the Rime Sparse, written over the next quarter of a century: poems dwelling on Petrarch’s helpless love for Laura, his dreaming and desires, his excited and jaded senses, his dismay at his own ageing and his grief over Laura’s death – and on the work of poetry, forging its tribute to her.