Women in Morocco are losing ground to tradition, prejudice and male greed

Libyan migrants’ boat deaths to be investigated by Council of Europe 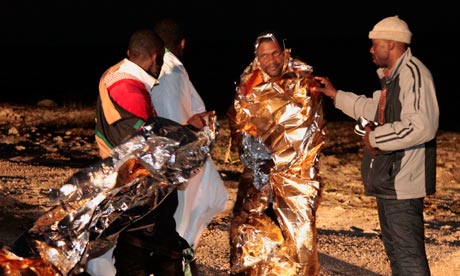 Migrants who successfully made the boat trip to the tiny island of Lampedusa, Italy from the unrest in north Africa receive assistance. Photograph: Francesco Malavolta/AP

Europe’s paramount human rights body, the Council of Europe, has called for an inquiry into the deaths of 61 migrants in the Mediterranean, claiming an apparent failure of military units to rescue them marked a “dark day” for the continent.

Mevlüt Çavusoglu, president of the council’s parliamentary assembly, demanded an “immediate and comprehensive inquiry” into the fate of the migrants’ boat which ran into trouble in late March en route to the Italian island of Lampedusa.

Yesterday, the Guardian reported that the boat encountered a number of European military units including a helicopter and an aircraft carrier after losing fuel and drifting, but no rescue attempt was made and most of the 72 people on board eventually died of thirst and hunger.