Surely you’ve heard this story before. It’s about a charismatic high school teacher named Will. He’s in his 30s, and he’s comfortable around his students, so he doesn’t mind when some call him “dude” or “Mr. S.” He challenges their religious beliefs, politicizes the apolitical among them, helps the meek to find their voices; at one time or another, nearly everyone in his class develops a crush on him. But no matter what the school administrators say, he understands and respects the boundaries between teacher and pupil. Or at least that’s true most of the time. 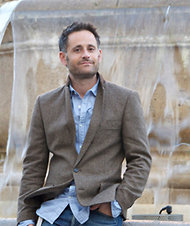 Give this premise to some clever TV writers with a yen for show tunes and you’ve got a season’s worth of “Glee” episodes. Give it to a talented debut novelist with a taste for French existentialism, particularly “The Stranger” — Albert Camus’s classic 1942 novel of an alienated man named Meursault who commits murder shortly after his mother’s death — and you’ve got Alexander Maksik’s “You Deserve Nothing.” This is a novel so rivetingly plotted and beautifully written that you forget its shopworn premise.

Mr. Maksik sets the main part of his novel in 2002 shortly before the American-led invasion of Iraq. Will Silver, who lost both his parents and left his wife before moving to Paris, teaches literature to the teenage children of diplomats and military officers at the International School of France. Mr. Maksik tells Will’s story not only from the teacher’s perspective but also from that of two students — Marie de Cléry, the daughter of wealthy Parisian parents, and Gilad Fisher, a fiercely intelligent and introverted son in an abusive household.

Like many popular instructors, Will is as much performer as educator, and in some early passages Mr. Maksik seems to be preparing readers for one of those overly familiar stories that pay tribute to an inspirational teacher. Will’s lectures on Shakespeare, Sartre and Camus — potentially didactic material that a reader might be tempted to skim in another novel — are exhilarating and a good deal more insightful and entertaining than just about any English-lit class I ever endured.

“You’re a life changer,” a fellow instructor tells Will.

Gilad says, “Mr. Silver was the first person I’d fallen in love with.”

But after Will (depending on your perspective) either succumbs to the flirtations or preys upon the insecurities of Marie, with whom he embarks on a doomed sexual affair, he undermines his own mythology. At first Mr. Maksik seems to regard Will and Marie’s relationship as mutually rewarding, bringing to mind a recent headline in The Onion: “Lonely Teacher, Outcast Student Begin Somewhat Endearing Sexual Relationship.”

A fair number of readers might actually find themselves rooting for this couple to remain together. But after Marie starts discussing the relationship with her friends, Will Silver’s fall becomes inevitable. As Glee’s Will Schuester said, “It takes years to build a good reputation, and only seconds to destroy it.”

As the novel proceeds Will Silver becomes acutely aware of his powerlessness, his inadequacy and his alienation from his emotions. Unable to effectively respond after witnessing a random murder on a Métro platform or an act of violence during an antiwar demonstration, Mr. Maksik’s hero becomes less Prof. John Keating from “Dead Poets Society” and more of an updated version of Camus’s Meursault, who also had a girlfriend named Marie. He wanders through a seemingly unjust world where serious and often unprovoked crimes go unpunished while relative misdemeanors, such as the one he commits by sleeping with Marie, cause great moral outrage.

Early on Mr. Maksik’s echoes of Camus are faint, but later, when he paraphrases and quotes directly from “The Stranger,” the parallels between Will and Meursault become nearly impossible to ignore. The novelist is not only modernizing “The Stranger” but demonstrating its enduring relevance, which has made it an influential text for everybody from George W. Bush, who reportedly read the book in 2006, to the Cure, whose 1979 song “Killing an Arab” provides a concise summary of Camus’s novel (“I’m alive/I’m dead/I’m the stranger”).

Where Mr. Maksik’s tale is headed may seem obvious. Nevertheless, he writes about the moral ambiguity of Will’s circumstances with dazzling clarity and impressive philosophical rigor. The contrasting perspectives of Mr. Maksik’s trio of narrators — each telling his or her story in the past tense from a time when the events described have faded in importance — add to the complexity and the suspense. With Camus, simple, declarative sentences can make for a certain deadness in the reader, mirroring Meursault’s, but here they create nerve-racking tension.

Like Meursault, Will remains unrepentant to the end, and his refusal to rationalize or apologize for his actions ultimately gives him strength. The novel’s very title serves as a tart reply both to the school administrators, who feel that Will owes them an explanation, and to Mr. Maksik’s readers, who may think they deserve a more satisfying moral or resolution than the one provided here.

If you’re looking for those, they’re available on Fox, Tuesdays at 8 p.m. The third season of “Glee” begins later this month.

Adam Langer is the author of a memoir and four novels including “The Thieves of Manhattan.”