Many Fear Revival of Islamist Party in Tunisia

I.M.F. Chief, Apprehended at Airport, Is Accused of Sexual Attack

The managing director of the International Monetary Fund, Dominique Strauss-Kahn, was taken off an Air France plane at Kennedy International Airport minutes before it was to depart for Paris on Saturday, in connection with the sexual attack of a maid at a Midtown Manhattan hotel, the authorities said. 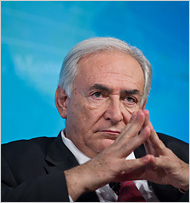 Dominique Strauss-Kahn, the managing director of the International Monetary Fund, in April. He was taken by the police Saturday from Kennedy Airport.

By AL BAKER and STEVEN ERLANGER