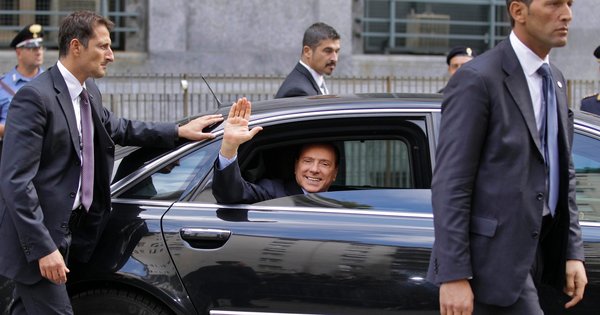 Prime Minister Silvio Berlusconi of Italy in Milan on Monday. Some critics are comparing his government to a royal court.

ROME — In the latest round of wiretaps to emerge in the Italian news media, Prime Minister Silvio Berlusconi is heard ordering up young women for his parties — allegedly flying some in on state planes — and complaining in 2008 that official meetings with President Nicolas Sarkozy of France, Chancellor Angela Merkel of Germany and Pope Benedict XVI were getting in the way of his social life.

But so far, the new wiretaps — and screaming headlines that quote him saying of his conquests, “I Had 8 Out of 11 of Them” — have not translated into political defeat for Mr. Berlusconi. Nor, it seems, has Standard & Poor’s decision this week to downgrade Italy’s credit rating on concerns that the government cannot manage its economy. In a snippy response, Mr. Berlusconi’s office blamed the media for a decision that he said was a political judgment not based on facts.

To a growing number of critics, the lurid party details, as well as a semi-conspiratorial attitude in which criticism is seen as disloyalty, are the latest evidence that the Berlusconi government, although democratically elected, has devolved into something from a different age: a royal court, in which everyone, from his coalition partners to his attractive young guests, serves at the pleasure of the prince.

In this reading, the government is still standing not because it is up to the task of keeping Italy out of Europe’s sovereign debt crisis, but because an entire political and professional class — including much of the news media that shape public opinion in Italy — is dependent on Mr. Berlusconi for its jobs and its standing in society. Under that logic, the government’s success is tied less to external economic reality than to internal political calculation.

“Usually a court systems falls when the ‘signore’ is no longer able to offer protection, benefits, money,” said Maurizio Viroli, a Machiavelli scholar at Princeton University whose new book, “The Liberty of Servants,” presents the Berlusconi era as the contemporary version of a Renaissance court.

Even though Italy’s borrowing rates are rising and the prime minister’s approval ratings are dropping, his loyalists are standing by him — at least for now — because none of them has enough power to replace him. All are tied to Mr. Berlusconi, sometimes through complex personal arrangements that transcend institutional roles, as some of the wiretaps indicate.

In the view of Mr. Viroli and a growing number of critics, Italy today is less a traditional Western European democracy marked by checks and balances and institutions that are more powerful than individuals, than it is an elaborate spoils system founded on loyalty as much as sovereignty, where laws are molded around the leader’s personal needs.

Such a system is based not only on jobs for votes, but also “consists of an exchange of favors for loyalty and jobs,” Mr. Viroli said. “I defend you if you have trouble. Not only do you vote for me, you serve me — by speaking and talking well of me.”

The favor-trading comes through loud and clear in the wiretaps, which emerged last weekend at the end of an investigation into Gianpaolo Tarantini, a businessman from Bari who is accused by prosecutors of arranging prostitutes for powerful people in politics and business. (Mr. Tarantini has said that he took women to Mr. Berlusconi’s parties but that the prime minister did not know they were prostitutes.)

According to one wiretapped conversation, Mr. Tarantini first met the prime minister at a wedding in 2008. When Mr. Berlusconi expressed interest in a woman who had been a contestant on the reality TV show “Big Brother,” Mr. Tarantini said he had her phone number and offered to serve as go-between because “she’s always with her boyfriend.”

(A lawyer for Mr. Berlusconi, Piersilvio Cipolotti, said that he had “no idea” how Mr. Berlusconi and Mr. Tarantini met and that he did not have the thousands of pages of conversations.)

In one intercepted conversation, Mr. Berlusconi is heard telling Mr. Tarantini in 2008 that he would not have time to meet as many women as he had hoped. “They’re piling me up with tons of commitments,” he says. “This week is terrible because, among other things, on Saturday morning I’m receiving the pope at the Quirinal Palace together with the head of state. Saturday afternoon I’m in Paris with Sarkozy and Merkel and Gordon Brown. Sunday evening I’m speaking in Milan at the party for National Alliance, so I’m really in a bad way.”

He added, referring to an unknown woman: “And tomorrow evening I also have a possibility of calling Francesca.”

In another conversation, Mr. Berlusconi tells Mr. Tarantini that he would invite executives from the RAI state broadcaster and his own Mediaset company to a party, and that he should tell aspiring starlets that “they are facing men who can decide their destiny.”

In a separate case, Mr. Tarantini was arrested this month on charges that he extorted money from Mr. Berlusconi in exchange for favorable testimony in the Bari prostitution probe. Mr. Berlusconi has said he gave $684,000 to Mr. Tarantini to help “a family in difficulty.”

The prime minister is named as an injured party in the case but has refused to meet with magistrates, which critics say is because he might quickly turn from a person of interest to a person under investigation.

To others, the anomalous part of Italian democracy is not the so-called Berlusconi Court, but the fact that magistrates overuse phone taps and routinely release embarrassing information to the public even if it does not always yield charges. Mr. Berlusconi regularly turns up in wiretaps leaked to the press.

“Italy has a traditional political system which everyone considers normal, and it was destroyed by demagogic judges,” said Giuliano Ferrara, a long-time Berlusconi loyalist who has defended him in his nightly prime-time program on the leading state broadcaster. “I think Italy should do reforms, not judiciary coup d’états.”

In a drumbeat growing ever louder, the opposition has escalated its calls on Mr. Berlusconi to resign. On Tuesday, Emma Marcegaglia, the president of Confindustria, Italy’s top organization of industrialists, harshly criticized Mr. Berlusconi, telling the government to run the country, pass reforms or go home. “Italy is a serious country, and we’re sick of being an international laughingstock,” she said.

A growing number of Mr. Berlusconi’s loyalists have begun to position themselves for a future without the prime minister. But when that future will begin is anyone’s guess. “It has nothing to do with the economy, politics, consensus,” Mr. Ferrara said. “This time the judges will do it.”