Could the Assad regime fall apart? 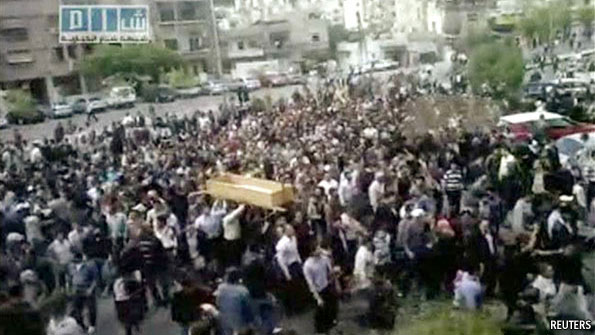 AFTER swinging between reform and repression, President Bashar Assad has cracked down on anti-government protesters with renewed and desperate vigour. On April 22nd more than a hundred Syrians were killed in at least 14 different towns, by most counts bringing the death toll since demonstrations began in earnest a month ago to more than 450. On April 25th the repression reached a new ferocity when tanks rolled in to the southern city of Deraa, where the protests had begun. The death tally could yet rise sharply, as Mr Assad’s legitimacy falls fast.

Before the army launched its attack on Deraa, electricity and communications were cut off and outsiders banned from entering. Water and bread have been running low. Wounded protesters are being denied access to medical treatment. Scores of people there and in other areas, including Douma, a suburb of the capital, Damascus, have been locked up. Checkpoints have proliferated. Parts of the country feel as if they are under siege.

After lifting the emergency laws that had prevailed in Syria for nearly half a century, Mr Assad seems to have run out of concessions to offer the protesters, who are demanding more vociferously than ever that he and his regime should go. But Mr Assad may think he can copy the methods that kept his father, Hafez, in power for 30 years until his death in 2000. When Islamists revolted in 1982 in the town of Hama, it is generally reckoned that the senior Assad, ordering his army to shell the place, left 20,000 people dead. Today’s president has also shown he can be tough: when suppressing a Kurdish uprising in Syria’s north-east in 2004, 30 were killed. But now he looks set to kill a lot more.