Cultura e Libri - Culture and Books - Culture et Livres > English > Art > Can Lady with an Ermine really take down Mona Lisa in the battle of the Leonardo blockbusters?

Can Lady with an Ermine really take down Mona Lisa in the battle of the Leonardo blockbusters? 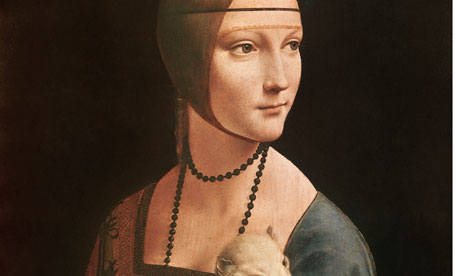 Prize fight … Lady with an Ermine.

Forget the Olympics and tuition fee demos. If reports are to be believed, the National Gallery’s Leonardo exhibition is going to generate the sort of collective mania that will take riot police and water cannons to contain.

Remember Monet at the Royal Academy a few years back? Remember what a complete Mongolian goatpoke it was, with those lines of mooching, slackmouthed waterlily-fanciers backed halfway up the street? Well, this will be worse. I blame Dan Brown, who – despite apparently thinking Da Vinci was his surname – has convinced millions that Leonardo’s work is the key to the greatest evil secret ever.

The National Gallery has already announced that to prevent “gallery rage”, it will issue only 180 tickets for each half-hour slot, rather than the 230 its licence allows. This will cost it £10,000 a day in potential revenue, but will greatly reduce the risk of anyone being assassinated by a 9ft-tall albino assassin from Opus Dei.