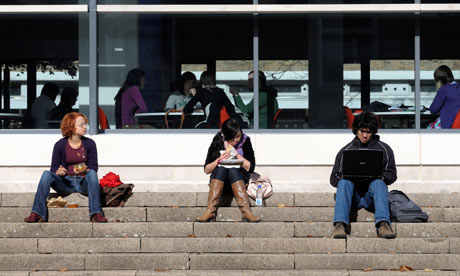 The NUS fears overseas students will think that UK universities do not welcome them any more. Photograph: Paul Williams / Alamy/Alamy

The government’s “anti-immigration rhetoric” risks giving the impression that British universities do not welcome the contribution of overseas students, the National Union of Students (NUS) has warned.

Aaron Porter, the president of the NUS, said students should not be included in migration figures after the Office for National Statistics published data showing that the number of migrants coming to study had risen by 30% in the past year.

Porter said: “The idea that students – who are a transient population which leave the country after three years – are included in migration figures is wholly illogical. The contribution of international students to the UK economy runs into the billions, and helps to subsidise home students.

“Overwhelmingly, home students believe that international students add cultural and economic value to our campuses, which makes UK institutions the envy of Europe.

“Universities have not hidden their concerns that the anti-immigration rhetoric has given a perception that British universities are not open for business.”

Vice-chancellors echoed the NUS’s concerns over the language used when discussing migration.